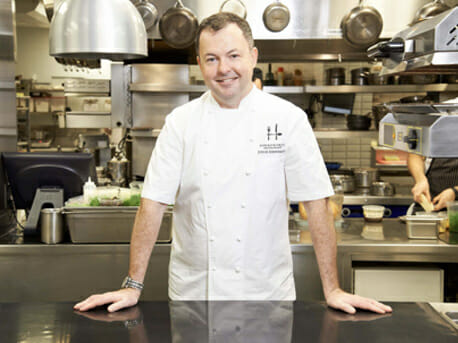 Vancouverite Chef David Hawksworth spent a decade in Michelin-starred kitchens in Europe before returning to his hometown to open his successful Hawksworth Restaurant in 2011. Since then he has won numerous awards for his eponymous restaurant and his other ventures, Bel Cafe and Nightingale, as well as beginning a partnership with Air Canada to create menus for international business class and Maple Leaf lounges. David has been a long-standing supporter of Fishing For Kids, the West Coast Fishing Club’s annual charity tournament benefiting the Canucks Autism Network. In 2013 he launched the Hawksworth Young Chef Scholarship Foundation, which annually awards $10,000 and an international stage to boost the career of a young professional chef.
share

How did you get involved with Cause We Care Foundation?
My wife Annabel is an active board member of Cause We Care and she introduced me to the organization but, as a father, if it’s anything related to children then I am automatically in. For several years it was just my mother and I, so I can relate when it comes to single mother-led families who are living month-to-month. My experience gave me a huge admiration for single moms. For the past two years we have lent support by organizing the turkey dinner for Cause We Care’s community holiday party. In December, we fed for 250 people at Ray-Cam Community Centre and the year prior, fed 600 at Thunderbird Elementary School.
You were recently invited back to your old high school in Vancouver's West End. How did that visit affect you?
It shocked me to see what is going on and how hard it is for the kids. It really is difficult for them. With house prices and rents going up, the living areas become more crowded and there could be three or four kids living in a one-bedroom apartment. How are those kids going to get a good night’s sleep and eat well, then put in an effective day at school? There are so many things working against them.
Why is food such an important part of school life?
My old high school showed me their school meal problem. There was a crack in the kitchen floor, so the school department came in and said we can fix this but it will take six months, so there are no more meals for the kids. They might not be getting a good meal at home and now they are not getting one at school. Everyone knows how distracted you are if you haven’t eaten. It’s a really vicious circle. If you’re not getting fed then it’s it affects every part of your life. Unless you have a burning ambition to do something, what’s going to happen to your options of a successful career if you’re not being fed properly in your formative years?